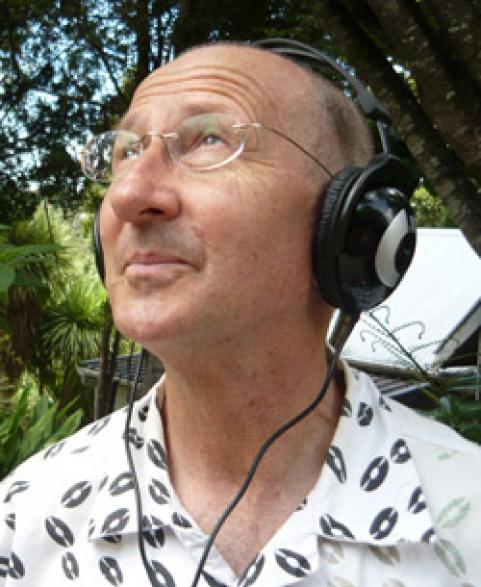 Ladies and Gentlemen! And Simon Morris! Tonight, live in the Dayglo Disco one of New Zealand's (and indeed the World's) finest and most accomplished musicians and singers, a very old chum of The Prop's, and a very fine fellow indeed. A veteran of some of our country's best bands the legendary Mammal, the extraordinary if short lived Crocodiles, as well as the unforgettable and beautifully named The Vulgar Beatmen ... and then, in a kind of self-reinvention, became a progenitor of gospel choirs and a giver of harmonizing workshops that are truly inspirational (having been to one for a weekend we know of what we speak even Grahame Sydney found he had a voice, a miracle in itself). Among his many achievements perhaps his greatest is the founding, and running for 20 or so years, of the amazing Sydney a cappella choir, Caf

If you have never experienced the joyous delight of singing four-part harmony in a big Gospel choir, do yourself a favour and give it a go. Belief is not necessarily a requisite. And better still, look out for Tony's movements (which can be tracked on his website). If he's coming to town, do not miss the chance of a weekend's singing workshop with the man himself.

Tony is the only person we know who has actually sung in the Rev. Al Green's church. But the Prop first got to know Tony when he was studying at Victoria university, and the Prop was ... doing anything but. One of those people that's always popping up in your life, and we are always delighted to see him. He nailed Heard it Through the Grapevine at the Prop and B. Brown's last big birthday bash.

We'd like to see a big medal on that man's chest he has brought music into more people's lives, good music, music you make, than anyone we can think of in the Antipodes. Respect and thanks. And what a cool and different Top 10.