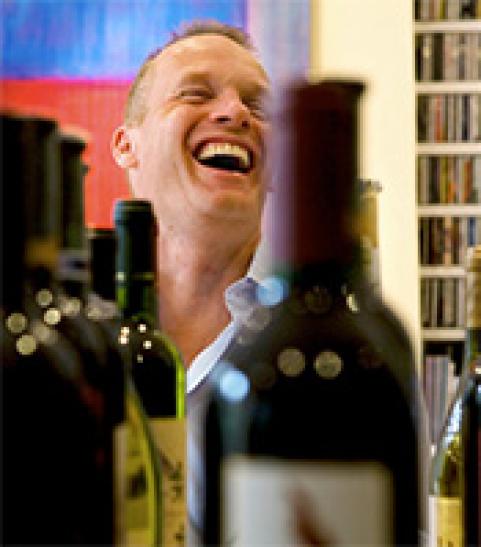 Ladies and ... and ... and ... oh well. Ladies and “Gentlemen”! Back in The House, and our first big night for 2015! Yes, the Dayglo' is back in business once more. With feeling. And how strangely gratifying -- a full house. Of Groovers.

Probably due to this week's hot DJ -- direct from Ibiza via East Cheam - one of the world's hottest Jocks, and the Master of MWs, the Man himself... none other that MR TIM ATKIN ESQ MW!

Ladies, let the man through, and give the paisley shirt back...NOW! That's better, here he is, clothed and ready to rock. Fast and eager to please on the dance floor (and nothing if not original with those oh so English moves), slow and deaf in a go-kart, he is a positive adornment to any event involving wine. Adornment, I tell you! As well as being one of the most influential wine writers in the world today, he was awarded Online Drinker of The Year 2014! Wow! Respect! Oh wait, I read that wrong. Correction -- Online Drink Writer of the Year (2014 Fortnum & Mason Awards). Ah that makes sense. In addition -- Online Communicator of the Year (2014 Louis Roederer Awards). You really need to keep up, down the back - and check this out -- timatkin.com (2013 and 2011 Louis Roederer International Wine Website of the year). Ok, enough with the awards suffice it to say that no one is more respected here at TPHQ. What a palate! What command of the Queen's English! What profound knowledge of all things vinous! What a good bloke! What a dancer! (Would someone check on those Tim slightly injured earlier in the night when we played Brian Poole and the Tremeloes -- at his request -- those flailing arms...) And did I mention the photography? No? The man is seriously good. Did I mention the millions of column inches he has written for ... oh shit, stop throwing stuff! Olly Smith -- I saw that! Security! Throw that man out. Now! Jolly Olly -- that's the one -- out now. Noisy bastard. So here he is: dapper, charming, erudite, funny, a true wine legend....take the mike Tim ... with your hands! Ladies and Gentlemen the one and only (thank God) MR TIM ATKIN MW!

Brilliant Tim! Ladies and Gents -- give it up please -- Oh please dear God no! There he is back on the floor doing that windmill thing again. No matter, heads down and a big hand for the impeccable Urban Legend himself MR TIM ATKIN!