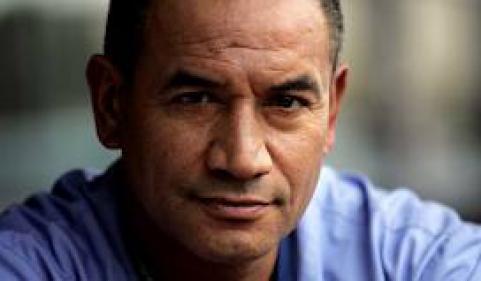 Ladies and Gentlemen! At last, after about five years of procrastination and general silly-shally -- out of the blue, this week's DJ, our pal and colleague -- man of few words (clearly), that great actor, and lately star of his OWN reality show, The Life and Times of Temuera Morrison (pretty brill actually), star of many movies including of course the iconic Once Were Warriors as Jake the Muss, Vertical Limits, Star Wars and many more. From a very distinguished and famous family of performers and entertainers, Tem is a musician in his own right as well as nephew of the great Sir Howard Morrison, king of kapa haka and prominent member of Te Arawa, worked with the Prop on The Piano where he was critical in keeping us all in good heart, a true NZ/Aotearoa National Treasure. On his Facebook page he describes himself simply as "a loveable chap," and, well, that's true. Dayglo Denizens! A big cheer for the one and only, the great TEMUERA MORRISON!