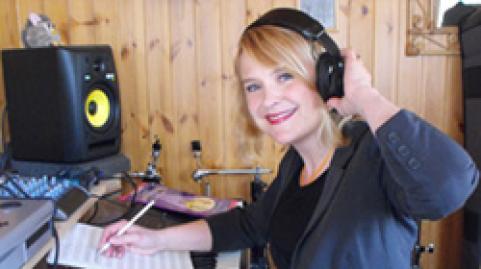 Welcome to The Dayglo Salon, a virtual Oasis from the usual vulgar and obnoxious noise upstairs. Yes, the Dayglo Disco is off limits for now, and has been given over to our annual Strictly Come Dayglo Comps.

But look, we'll have to be out of here by 5:00, as an enormous team of ancient seamstresses will be taking over the Salon, since Strictly will be using even more tulle, bows, frills and general flouncery than ever. So, while the calm lasts, let's bring on someone most marvelously well suited to our soiree - invitations only (and please remember Virtual Boris is at hand to eject any Salonistas sans invites). Applause please: direct from BBC Radio 3 a Broadcaster of impeccable credentials, we welcome straight from this morning's Classic Collection and Essential Classics -- the latter alittle like our Top 10 -- since 2007 Sarah has been asking The Great and The Good to choose their classical favourites -- an astonishing line up of everyone from Mike Leigh and Terry Waite to Fiona Shaw, Branford Marsalis, Hugh Bonneville ... oh, hundreds of ‘em. All very grand, with one glaring exception -- the Prop will be featured sometime near to Xmas. Oh well.

Anyway, we couldn’t be more thrilled to have with us, someone who really knows what’s what with music, and an interviewer of exceptional ability and a good egg to boot -- Ladies and Gentlemen - the charming and glamorous and very brainy MS SARAH WALKER!

Like many broadcasters, Sarah Walker was born in the South Yorkshire town of Barnsley. She learned the piano from an early age, mostly using her skills to improvise satirical songs about teachers and to perform on her own pretend radio shows (recorded on cassette; there was one listener). Sarah studied music at Royal Holloway College where she met her future husband, the jazz musician Martin Pyne, and together they travelled around the south east of England in his red Daihatsu van at 45 mph, listening to a wide range of music from Al Jarreau to Boulez. Sarah is now a presenter for BBC Radio 3 where she enjoys welcoming a wide range of guests onto the morning show, Essential Classics.

Here's my top ten, in no particular order:

Thanks you very much Sarah, a great pleasure. And look, we won't be in any way hurt if you just bin the interview with that stammering charmless fool The Prop. Standards, standards ... But thanks for everything! And thanks for the Salon Soiree. Another BIG DAYGLO HAND for Ms SARAH WALKER!!