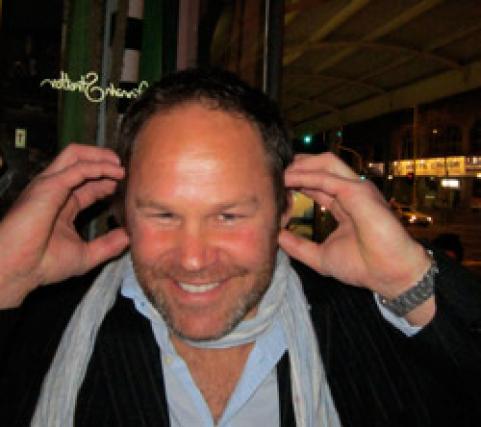 After a career as an AB who sustained many injuries in the course of his duties, on retirement Josh had to be largely reconstucted. The NZRFU rebuilt him comprehensively and included special and innovative features. Josh now has an iPod implant somewhere near his groin, and his hands conveniently house small speakers. Here he listens to Martha and the Vandellas while Dancing in the Streets.

Ladies and Gentlemen! Today, a special World Cup appearance, spinning the discs -- All Black immortal Josh Kronfeld! Not just one of the greatest flankers of our time, but one of the great AB dancers. Yes, believe it or not, for the first time in the TP disco, someone who can actually do the moves! Ranked third 2009 in Celebrity Come Dancing, Josh is now more than ever the object of envy of NZ Blokes, especially those who've seen Josh play mouth harp! So, here he is, Sportsman, Muso and
NZ's own Semi-Astaire ... A big House of Pain roar for ... Mr .. .Josh ... KRONFELD!!!

Note from Josh: These are not necessarily my all time top ten but if I was listening to music and or making a play list they would be the some of the first to go on. cheers, jk.

Josh is a veteran of two World Cups, no less. Fairly sure he'll be out and about a bit later this time, so if you run into him late night, possibly at the Two Paddocks Disco, or the Britomart Country Club where TP is available by the glass, ask him again about the infamous Johannesburg poisoning in 1995, maybe. Nah, forget it, it's all behind us now. Instead, lets crank up Kora, and rock on! Thanks Josh, great Top 10, my man ...