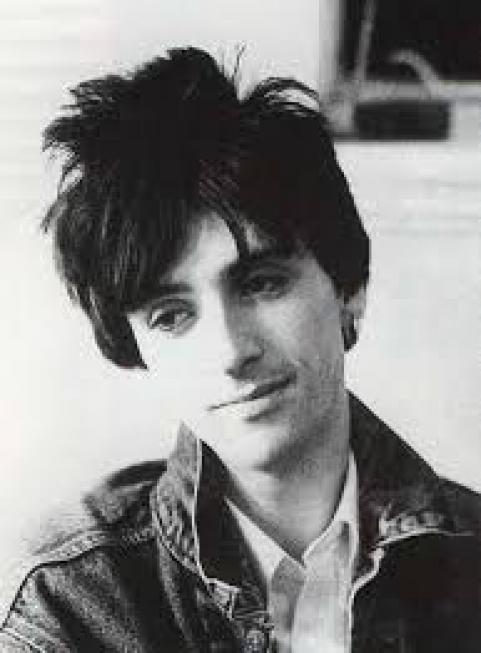 Ladies and Gentlemen. Dayglo Denizens! Disco Divas! A moment of reverential rock'n'roll hush if you please! Tonight, courtesy of Two Paddocks Virtual Airways (the only airline that has less idea of how to fly than you do), a true Rock Legend, and a certified God of the Guitar! Yes, all the way from sunny Manchester (or, wait, what time of year is it?) ah, possibly Portland Oregon, or erm ... was it New York City? ... well, definitely the northern hemisphere... it's... Johnny Marr! Yes, THE Johnny Marr! When you picked up your comps tonight, you cheap slatterns, you had NO idea you'd be getting a Living National Treasure, live on our livid, lively, lovely Dayglo stage! Did you now? Johnny Marr - formerly, and crucially, a founding member of massive Manchester band The Smiths, a band that changed music forever, and later The The, The Cribs, Modest Mouse, etc, along with a ton of other work as session musician, producer, solo artist, and all that ... an incredible career and body of work. Here at the Dayglo we first got to know Johnny listening to The Smiths back in the day. And what we liked most was the sublime contrast between, but happy meld of Morrissey's i-am-going-to-throw-myself-under-a-bus-right-now and Johnny's get-up-and-dance-good-time guitar. That maestro. Ever since, he's the kind of guitar player, that you recognize immediately, whatever the context. One of the truly greats. And here he is, we are honoured to have Jonny in the house, Fender in hand, but DJ for the night here in the Olde Dayglo. And you are honored, too -- freeloaders all -- so give it up, big ups indeed, and make some BIG NOISE for the inimitable, the brilliant...JOHNNY MARR!

Superb Johnny, and many thanks. The Dayglo is yours any time! Come back to NZ soon -- another 7 Worlds Collide is surely well overdue!