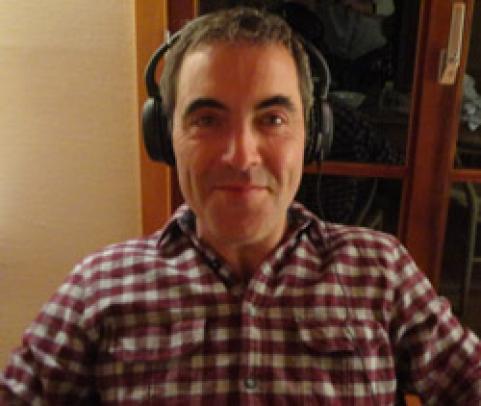 Ladies and Gentlemen! Brruuppp! Your M.C., in the Place To Be ... Tonight, direct from the set of The Hobbit, a very special guest D.J. ... Boom! Yes, courtesy of Two Paddocks Virtual Air (The airline of choice to the virtual jet set) here in the Dayglo Disco (this week's colour - Livid Lime) the fourth actor from Ireland to grace our decks count them, and award yourselves ten free points if you've got them all -- yes, one of the world's best loved actors ... and one of the very best, period. You knew him first from Cold Feet, great series, you followed him religiously every week in Murphy's Law, he made you laugh in Hear My Song and Waking Ned Devine, he rattled your cage in Bloody Sunday, you thought him a knockout in Five Minutes of Heavenand Jekyll and ... look, this is beginning to sound like bloody Spotlight. Let's just say we wish we had half his talent, his wit, his charm, his charisma ... yes it'd make you crook, the man's got it all. Without further ado, let's bring him up here, the likeable larrikin, Ballymena's Best, here with his very own Top Ten, a big Dayglo hand, if you please for ... Mr ... Jimmy Nesbitt!

Words fail the MC a dream of a Top 10. Hats off to you Jimmy, excellence as in all things. And a beautiful piece of writing , the sort of prose that makes you nostalgic for things you remember and things you never knew, just as a great song will. You make us all proud to be from Ulster! Ladies and Gentlemen, grateful applause please for The Man himself the absolutely unique, the brilliant ... Mr Jimmy Nesbitt!!