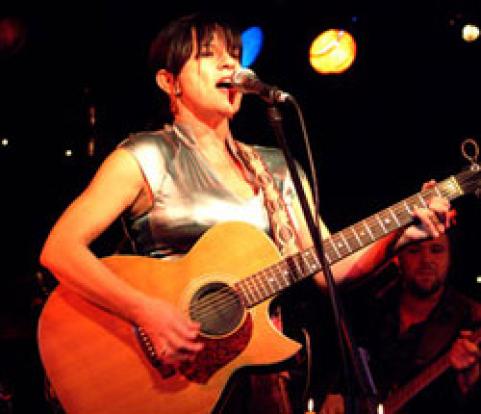 Ladies and Gentlemen! I give you fair warning, and I'm only going to say this once ... the next idiot who wolf whistles is out on his ear, and banned for a fortnight! Yes, I know it's Jenny Morris, well I would wouldn't I -- jeez, I book the acts for goodness sake ... and yes I know she's the sexiest damn thing we've ever had on the Dayglo stage, but any more of that crude carry on, you louts down the front, and I'm bringing out the yellow card! We won't have it!

Here she is, Ladies and Gents. You've asked for her, and at huge expense, and an even greater effort, we've flown her in on Two Paddocks Virtual Airways First Class (where everything is complimentary, except the lifejackets -- negotiate at the escape hatch, please). She's one of Australasia's greatest ever Chanteuses, a rock legend, an all-class, all-sass, all-singing and geetar playin' sensation. And we love her here at the Dayglo for being a great NZer as well as a great Australian (Order of Australia, Brava that girl!), a model citizen, a tireless worker for charity. We play and love her stuff all the time here (the Prop's particular favourites are Tears, Break in the Weather, Gonna Get Hurt, She Has to be Loved, You I Know, and the Paul Kelly song Street of Love) ... But more than all of that she's a great pal, generous, funny, good company, and she's lovely. Give it up please, big time for a National Treasure, the one and only, the gorgeous ... JENNY MORRIS!!

The top 10 could change on any given day but as of today, in no particular order ...

Thanks Jenny, an unbelievably great set. And here is a little bonus (please don't sue) ... here she is, the Goddess herself, singing at Bryan Brown and the Prop's birthday bash, where she oh so generously coordinated the music. As always, Jenny rocked the house. The Earth Moved! (4.25 MB, MP3)

Oy! Down the front! I heard that! SECURITY!