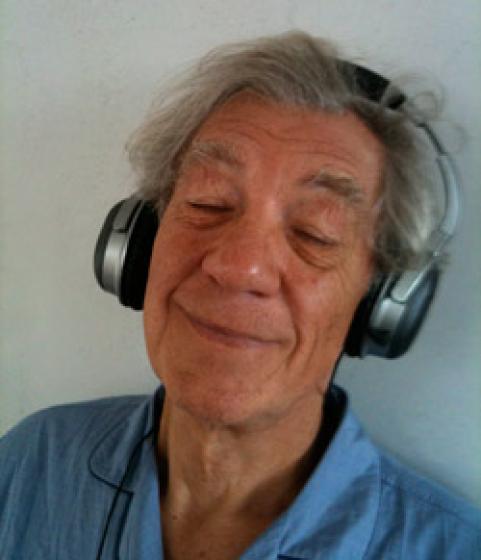 Ladies and Gentlemen! Pray silence in the Dayglo! Be upstanding, if you will, for a Knight of the Realm! Have we ever been grander? I don't think so! Have we ever been smarter? No! Have we ever been more plush? Well, perhaps back when we still sported the velveteen couchettes. Today, a rare and extreme honour ... the nobbiest of nobby nobs, one of the Very Greats of Stage and Screen, a marvelous actor and a lovely man. Here gracing the newly reno'ed Dayglo (how do you like the Orange we found in the Army Surplus Store in Haight-Ashbury then?) ... someone with so many theatre credits you need another couple of pages when you print the programme, a stalwart of the RSC and the National as well as the West End in general, a great Shakespearian thesp, and, as it happens, a big old Movie Star, to boot. Of course you loved him in The Lord of the Rings Trilogy and X Men, and who wouldn't? But we thought he was the bloody bees knees in Gods and Monsters, Scandal, Apt Pupil, Richard 111 and...oh, bollocks, the list is too damn long, and at the end of the day, you're here to boogaloo in the Dazzling Dayglo Disco ("Vile" -- International Herald Tribune). So put those dancing pumps back on, and put those hands in the air, and make way for the great, the one and only ... SIR ... IAN ... McKELLEN!

Music is not a daily part of my life, with no Ipod, no CD player and the radio stuck on BBC's Radio 4, which is mostly talk.

Any live music is what I like most, whether classical, jazz or pop or opera or musicals or singing in the shower. Here are my faves through the years.