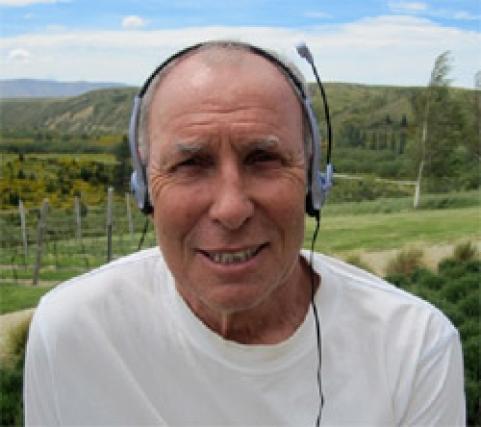 Ladies and Gentlemen! Tonight in the Two Paddocks Dayglo Disco (not so much psychedelic décor, more bilious, if seen in the light of day), direct from our kitchens where he’s been helping the short-order cook, a man who has made a most distinguished career painting a once little known corner of New Zealand, and made it famous as a result.

In fact, he not only has defined that landscape, he is now part of it -- if you see a stringy, gnarly looking geezer painting en plein air among the tussocks, it’ll be him. Either that, or it’s a telephone pole, they are easily confused.

So here he is, a very old companion of Two Paddocks (and an avid drinker of our best, the bastard) ... the Prop has been kind enough to be his friend since 1968, Otago University, and well remembers Syd’s first of many rash pronouncements at that time (“Impressionism is shit!”) ... he is also a good keen man when it comes to music (the Prop and Syd have gone far too late far too often arguing about songs) and what is more is a pretty fine uke player, having had a Kamaka concert ukulele given to him by yours truly ... the jams, the jams ... Let’s give a big Two Paddocks cheer for our friend, our neighbour, our old mucker ... he’s dry as a biscuit and very funny ... we rate him here in the Dayglo ... give it UP for ...Mr ... Grahame SYDNEY!!

Reading through your previous contributions I am struck by a) the frequency of selection of B Dylan, and b) the vast chasm which separates me from Josh Kronfeld.  Not only have I never heard of any of the music he selected, I've never even heard of the MUSICIANS, if indeed that's what they are.

I too would have included a B Dylan, but having noted a short-list of about 45 songs vital to my very existence on a daily basis, this below is a random grab from that necessary bunch. In no particular order:

All a bit predictable, on viewing it.

Well, dammit, we can’t argue about any of that, much as we love fighting with Sydney, an impressively tasty songlist, and we love every track there. And one excellent surprise there, my Sydney neighbour, the extraordinary Billy Birmingham [(the12th man) -- caveat for North Americans  --  you kind of need a working knowledge of cricket commentaries in Australia to get a full grasp on what genius Billy possesses. As for Sydney himself, if I called him a genius, that would spoil an unbroken run of forty plus years of being blisteringly rude about each others’ work, so I won’t. But here are a few images that will give you an idea of what the man does  -- you decide. And follow this link for more...

Oh okay, I will grudgingly admit through gritted teeth, he’s a great artist. But don’t tell him I said so. Oh there he is now, back on the floor doing that awful dance thing he does... Let’s give a big Dayglo cheer for the Maniototo Marvel himself...Grahame Sydney!