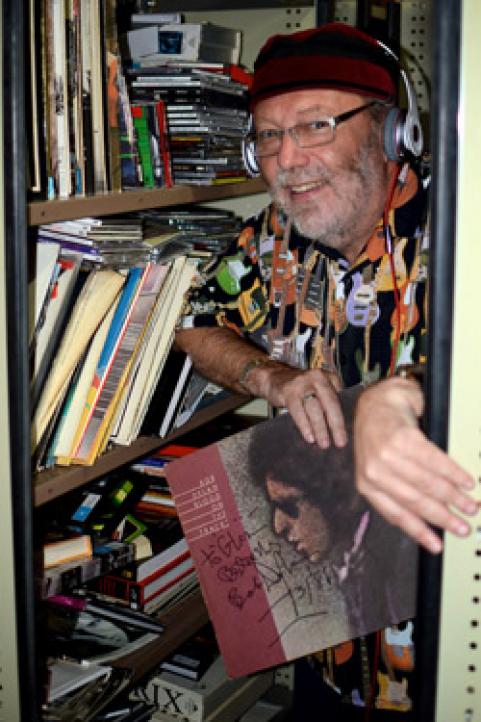 Ladies and Gentlemen! A little hush if you please in the Dayglo...we know the Kahluas and milk are kicking in about now (for those of you who unwisely choose not to be drinking Two Paddocks on this your big night out) and you're all a tad over-excited, but look, tonight you'll not just be dancing, but you might just learn something. Because tonight's special guest DJ knows more about rock, and pop, than pretty much anyone else alive. So much so he won "Rock Brain of the Universe" no less than three times on the BBC. It has been his life's work. At last, someone who knows what they are talking about. Not just that, but he's managed bands (notably Ol' 55, with the brilliant Frankie J. Holden), writes music, has done his time -- decades -- on radio and television, run record labels (you remember actual records...Raven Records he runs to this day), written countless books and articles on music, and heaps of other stuff. We love him at HQ as he helps while away the hours on our favourite airline QANTAS with his regular audio programme "Reelin' in the Years."

He is a scholar of music, a booster of Australian music in particular, and above all a fan. He knows everyone living or dead in popular music, and has stories about them all. He is also a generous and good bloke, he's great company, and we are delighted to have him here in the Dayglo (this weeks colour -- chunder-chartreuse), a big Dayglo Dazzle of a hand for the distinguished and learned...Mr GLENN A. BAKER!

Is that ten? Oh dear, what about Waterloo Sunset, A Day In The Life, Pretty Vacant, You Can't Always Get What You Want, Goin' Back, Fortunate Son, Return Of The Grevious Angel, Mr. Tambourine Man, Golden Miles, Rain, Before Too Long, Immigrant Song, Walking On The Moon, Suite Judy Blue Eyes, I'm Not In Love, Both Sides Now, Alfie, What Is Life, Life On Mars, A Change Is Gonna Come, Strange Fruit, Try A Little Tenderness, In Dreams, Reason To Believe, Orchard Road, The Logical Song, Tutti Frutti, That'll Be The Day, Blue Suede Shoes, almost anything by Hank Williams and Woody Guthrie, more Leiber & Stollers than I can count, the perfect pop of Dancing Queen, Heart of Glass, Venus, West End Girls and I Got You, and a few thousand others. Oh well, you all know who you are.

Well, what intolerable torture to ask a man who loves music more than life itself, so much music, to whittle it down to only 10 songs! Too bad Glenn old boy, that's the way we do it here.

But what a list! Can't possibly take issue with any of these (with the exception of those pallid 60's-wannabes Oasis), and look there it is -- the song that the Prop considers the greatest 3 minutes in rock history The Beach Boys' Surf's Up, a pocket symphony... Glenn A. Baker -- a man of erudition and enlightenment, and a Top 10 to write home about. Beautiful work.

Thanks Glenn mate. Ladies and Gents, another roar if you please as he modestly leaves the stage... Mr Glenn A. Baker!