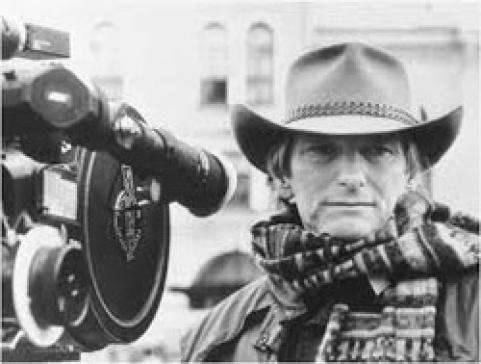 Ladies and Gentlemen! And Rob Sitch! Tonight, a very special DJ appearance in The Dayglo Delite, a formidably distinguished Lion of the Cinema, and a Great Australian, and not least an old Two Paddocks friend, ally and supporter, one of the key figures in the cultural renaissance that Australia enjoyed in the 1970s and 80s, and a leading light in Antipodean movies to this day, as well as a director of great import internationally. You perhaps know him best for The Devil's Playground, The Chant of Jimmy Blacksmith (btw, how interesting to see Tommy back in Red Hill wreaking revenge once more!) The Russia House, Six Degrees of Separation, Last Orders, Empire Falls and the recent Eye of the Storm with Geoffrey Rush and Charlotte Rampling. But here at HQ we know him best for Plenty and A Cry in the Dark ... because the Prop appeared in both along with La Streep ... an inspired DJ choice by Dayglo management not least because of Fred's profound interest and knowledge of music (see his movies as an insight into that) and because of course we love him to bits. A gentleman, a lout, smart cookie and clown ... here he is ... lurching up to the stage, half tanked and half ahead of all of us ... roaring and right! Put your hands together for our great friend and delightful colleague ... a big Dayglo Disco welcome please for ... Mr FRED SCHEPISI!!

We really love it at HQ when people we love, and find fascinating in themselves, go to all this trouble to choose their music with care, and then give us insight into both that music and also themselves ... thanks Fred, matey. Loved it.

I was going to tell a couple of stories about Fred at this point, but caution prvails. They are generally unprintable. Fred has his own vineyard now -- Pinot mostly -- but we think it goes into someone else's wine ... perhaps. One doubts if much of it gets past the front gate.

Fred is married to a saintly sort of woman, also a red hot artist -- Mary. No one has been able to count exactly how many children he has. Most of them work in the film industry one way or another -- in fact it has been estimated that about 28% of Australian casts and crew are Schepisi progeny.

We love you Fred.