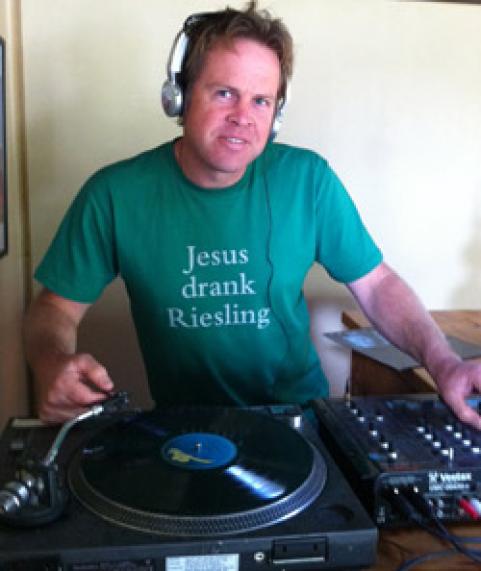 Ladies and Gentlemen! Oh ... none here? Just the riff raff then. Tonight in the newly renovated Two Paddocks Virtual Dayglo Disco ("Visually toxic"--The Times) our first guest DJ who actually looks at home in this pleasingly garish environment most of us in Central Otago merely put on clothes in the morning ... here's a man who dresses up, each and every day!

Regular Dayglo punters will know, that here at HQ, we take our hats off to many other wineries, we love quite a few; but some we love more than others. Mt. Edward in Gibbston is one of those, and here is its Vigneron, dressed in an appalling flared powder blue suit with lapels as wide as a B-52, unseemly yellow crocodile boots, and a genuine Memphis string tie with Native American motif, worn on a dizzyingly embroidered Taiwanese shirt. Yes, it could only be the one of a kind Duncan Forsyth!

Raised in the salubrious Hutt Valley, barely educated in Nelson, trashed at Vic, munted in New Orleans, obliterated in Sun Valley, demolished at Lincoln, Duncan, by great good fortune, found rehabilitation and sweet reason at last at Chard Farm in the early Nineties, and thereafter at Peregrine. Which lead to Mount Edward in 2004, which has become one of the very best Central wineries. The fall and rise of the Prodigal.

Occasionally, however, Duncan will revert to type, as his DJ set proves -- every year Duncan chances his health and sanity (such as he has left) with a pilgrimage to the madness that is Burning Man. Rash and extremely ill advised, yes, but at least when he gets back, bedraggled and rueful, he has good stories to tell. And here's one...

Denizens of the Dayglo ... avert your eyes if you are easily offended by kitsch on a grown man, but in any case, a huge Two Paddocks welcome to our friend and colleague, an awfully funny man, and awesome winemaker, and our ambassador at large, god help us ... The one and only ... Duncan Forsyth!!

webmaster's note: all photos are copyright their respective owners. Follow the links within the images to see the orginal photos

My TP top ten list comes on the back of a return visit to one of the great counter culture festivals on the planet, Burning Man, based in Black Rock City, Nevada.

Duncan! What a saga ... and here you are, in one piece and not just still standing, but actually still doing the Boogaloo like a man possessed. Respect! No-one has ever taken on their DJ responsibilities with such flare, conscientiousness and such flagrant disregard for their own safety and well being. Major kudos from all of us here at H.Q.

Speaking of health, many of you will be aware that Mount Edward produces consistently great Pinots, and a Riesling that is pretty much ambrosia. Seek them both out when you can. Give that dancing, burning man some space, and applause not only for his inimitable flair for fashion, but for moves never before seen in the Dayglo. A massive Two Paddocks hand for our friend... Duncan Forsyth!