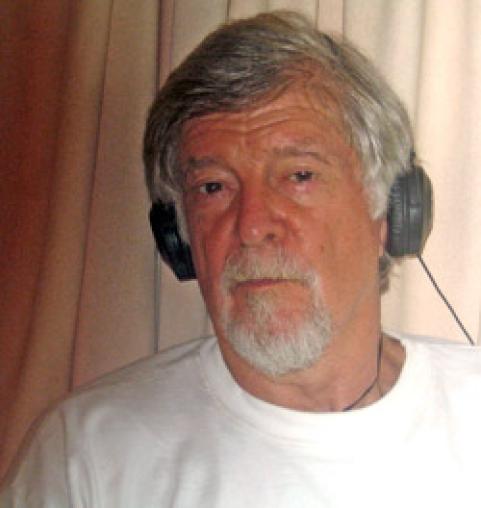 Ladies and Gentlemen! Quiet please! Thank you, thank you. Now, a word of advice, which may come a little late ... but, too bad. Right, so here's the thing if you want to get an early education in, and appreciation of, good cool music, get an Older Brother. Like this one. Ideally about five years older than yourself, and one that's kind enough to let you listen to his stuff. So, flash back, if you will , to sleepy obscure Macandrew Bay, Dunedin in the 50s and 60s, a half timbered house on Howard St still then unsealed and dusty - and upstairs - two boys, in short trousers, still a bit British/Irish , fairly shy... and here's the older one, easily the cleverest the one I would catch the train with when off to our respective grim boarding schools, and later the same bloke off to Otago University in Mum's Fiat 500, and there, while no one actually says so, he becomes, in hindsight, something akin to a beatnik. Yes, a duffle coat, pipe, bongo drums...and I can't be entirely sure, but I seem to remember an actual beret. Maybe it was a black sombrero. Details aside, the important thing here is, we have adjoining rooms. So, when small, he would usually deign to talk to me as we drifted off to sleep, play with his Dinky toys and even (the single most kind thing he ever did for me) read me Treasure Island, complete with blood curdling pirate voices etc. And on his Pye radiogram, he'd play all this cool music. Elvis, Bill Haley and the Comets, The Lord Invader, The Mighty Sparrow. And then later cooler stuff still Big Bill Broonzy, Muddy Waters, Sonny Terry & Brownie McGee, Mingus, Miles, Cannonball Adderley... some of it a bit challenging when you are 12, but when you have an Older Brother, you take their word for things, and wisely so, because they are usually right. This was the real deal then as now. Stuff that took you right through that comfortably tiled roof above you, away from the green empty windswept Otago Peninsula to another world altogether, an imagined cosmopolitan world, full of saints and sinners, and women with hips, and smoky clubs and woah... now the Brother has girlfriends, and he's acting in plays ; man this looks cool ... And then suddenly all too soon, he's off to Cambridge University, and we never live together again ... And so then it's time for me to find my own growing up, and my own music and... And quickly it's The Kinks, and The Beatles and The Rolling Stones, and, Good Lord this is GOOD...and I wonder if The Older Brother is also listening to this over there among those dreaming spires? Will we ever know?

Dayglo dancers! All these years later, here he is ... one of the world's greatest authorities on Shakespeare, Jacobean Theatre, modern African literature, and lots of other things above and beyond thickies like you and me. To this day an enthusiast and student of great music. The finest of fellows, and the best of brothers ... a big big hand for ... MICHAEL NEILL!

[Webmaster's note: Apologies for the quality of some of these links. For the more obscure songs there weren't many choices on You Tube.]

Wish I could have included Bob Marely's No Woman, No Cry on my list -- the song that filled the cells at Ak Central Police Station after the Bastion Point arrests; and just about everything from The Harder they Come -- one of the great political films of all time. Ten is not enough!!

Actually, here is a vivid memory, a transitional moment, a matter of days before the Brother leaves for Cambridge. We are in the sitting room, the only ones home: Michael is typing and a study of concentration. I have a new record, just out that day the Beatles second LP - "With the Beatles." I very much want him to hear this, I put it on Dad's big Murphy Stereogram: "Michael, you gotta listen to this, you gotta, please, listen, you gotta." It's John Lennon screaming "Money" ... it's fantastic. I look over, hopeful ... maybe, just this once, please once, the Brother will actually like a record of mine? He must like it surely, it's bluesy. It's R & B . It finishes. Silence. He doesn't look up. And then, very quietly, he mutters "Yep. Not bad." YES! YES! Its a small concession. Very small. But it's something!