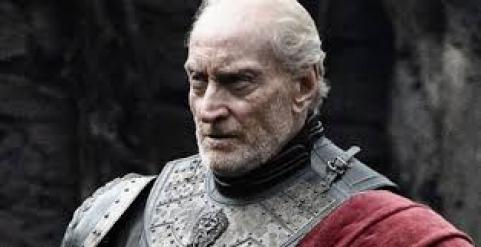 Tonight, courtesy of Two Paddocks Virtual Airways (Where Everyone Reclines, Like it or Not), all the way from Her Majesty's Sceptered Isle, another Old Pal, a great Thesp and superb Luvvie - a musical aficionado and ukulele player, Star of Stage, Screen and Radio - a DJ of distinction as we have ne'er seen the like of before. Or after. MR CHARLES DANCE!

You loved him in The Jewel in the Crown and have loved him ever since! Quiet Ladies! LADIES! Yes we know -- but really ... that is just, well, unseemly ... Latterly you loved him even more in Game of Thrones! Last warning I am not going to yell over you lot ... I AM NOT ... LISTEN ... oh well dammit, I give up. Charlie Dance fans you are just so... WRONG! Right, I'm going to carry on -- gritted teeth albeit. Charlie has worked with the Prop not once but three times! (Free virtual drink if you get all three.)

Here are some of Charlies' greatest hits other than that -- this takes 30 minutes, you up for it? No? Okay just a few highlights then -- Golden Child, Alien 3, Last Action Hero, The Imitation Game, White Mischief, Gosford Park, Underworld, Swimming Pool, etc, and on the telly Bleak House, Rebecca and -- I don't know dammit -- you asked. Oh you didn't ... moving right along, Charlie directed and wrote Ladies in Lavender with Dame Maggie and Dame Judy wildly successful. Watch this space. And on stage at the RSC the most leathered and lathered Coriolanus in theatrical history, Three Sisters, Long Day's Journey at the Lyric, Shadowlands in the West End nnngg nnngg nnngg ...

Never mind all that, it's time to get the Dayglo into gear -- Charlie -- our friend and ally - take it away Guv -- and LET'S ROCK with ... the great actor and utterly charming chappie - MR CHARLES DANCE!

Having made a reasonable living pretending to be an aristocrat, the secret is now out that in reality Charlie (as he is affectionately know to his more intimate acquaintances) is as common as muck.

State education, sporty but not in any way academic, he holds minimum qualifications, save an ability when the mood takes him to charm the birds out of the trees - it even worked on Her Majesty when she awarded him an Order of the (quaintly named) British Empire – one of around a hundred handed out that day, just to get it into perspective!.

He soldiers on getting work where he can, maintains a keen interest in combating the ageing process, and endeavours at all times to keep his rapidly balding head well below the parapet.

Occasionally he plays his ukulele well into the night, but more often than not is in bed by eleven with sadly usually no more than a good book to keep him company.

He is also known to be partial with the truth.

Many thanks Charlie, and let’s work again soon! Get the Prop out of the compost paddock, staff are begging! Ladies and Gentlemen -- an enormous, humungous, titanium tipped, silicone lined, 24 carat, sterling hand for this most excellent Officer of the Order of the British Empire... MR CHARLES DANCE!