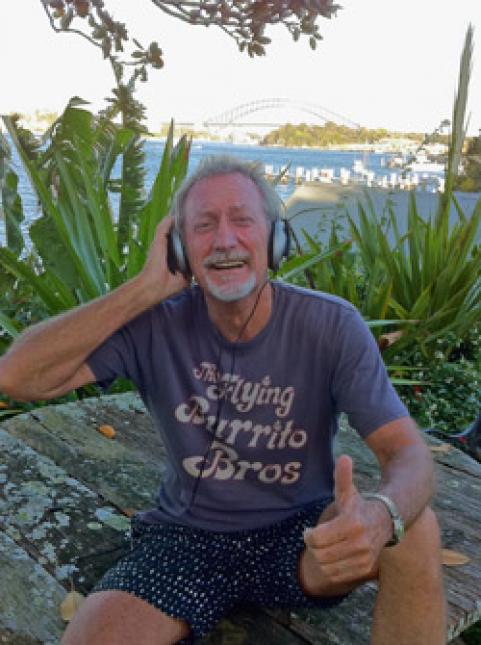 Laaadies and Gentlemen! Tonight, flown directly from NYC and the set of The Good Wife, (by Two Paddocks Virtual Air first class -- "you only imagine that bed is flat.") a very special Dayglo guest, arguably the Prop's closest friend, The Nipper from Panania, and latterly the Bodgie of Balmain; one of the greatest Leading Men of Australian Cinema of all time, a menace to himself and to his peers, an adornment to Australian Society, an advertisement for a good Catholic Education, an example to the fathers of Oz, a disgrace after 6 pm. Why he has been selected as DJ at all is a mystery in itself, the man is tone deaf (what little he can hear at all) and we have proof of his tin ear a recording of him butchering a version of his mate Billy Thorpe's great anthem Mashed Potato Yeah at the last big birthday bash. But here he is, he's dusted off the old 45's, he's got the winklepickers on, plus he's raided the old brylcreem jar, he's looking good, the crowd loves him .. .give him room please. Security he's fine he's with us bring him up to the stage, he's got his records on... A big Dayglo roar if you please for the one and only...MR BRYAN BROWN!!

One of the Prop's favourite ever chansons is Dexter and Sinistraby Karma County, which features Bryan on vocals. A heartbreaking story from a marvelous band. There is a surprisingly cheerful clip of it on YouTube, with BB in some vile shirts do not miss it.

Speaking of Bryan's greatest hits (yeah we know you're going to say The Thorn Birds, A Town Like Alice, Breaker Morant, etc.) the Prop's fave is Two Hands, with a very young Heath Ledger. And who can forget Bryan's vast hat in Australia? Baz put the scene where David Wenham treacherously feeds Bryan to the crocs back in the Director's cut. Please!

Bryan don't go yet, we will be dancing til 5:00 am tonight. Oh well, toddle off then, you old fart. See you back at the Dayglo next year!