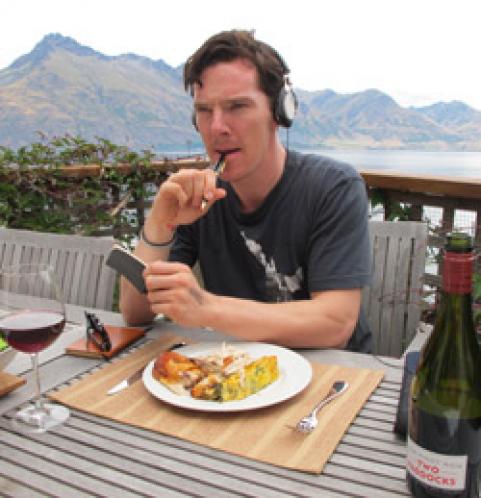 Today, not just one of the world's finest actors, but hands down the actor with not only the most difficult name, but simultaneously the most distinguished name ... Mr Benedict Cumberbatch! (And here we hasten to add that Benedict is absolutely not to be confused with those somewhat lesser actors Burnybun Crumblybatch, Binder-twine Cummerbund or Bendydick Lumbercrutch.) No, it's Benedict himself ... we are delighted he's here as our Special Guest DJ, not only because he is an avid music fan, but also because (and this is a first we believe for Dayglo DJs), he can actually dance! Gather round, yokels and other denizens of the Deep South, and see how it's done -- all the way from the dives of Soho and the South Bank, here he is to show us the latest dance craze from the North (and here thanks to The Hobbit and Peter Jackson) ... Mr Betterfit Clumsypants!

As for his acting ... well you know him best for ... well, just about everything ... because he's in just about everything! We've just been watching him in the wonderful Sherlock -- big ups, bro -- next thing you know he's in JJ Abrams new Star Trek, Spielberg's War Horse, Tinker Tailor, having been great in Atonement, Creation, and Amazing Grace, and so on.

We got to know him in South Africa on To the Ends of the Earth (BBC), just after he'd astonished us all as Stephen Hawking in Hawking ...but look, he doesn't need any more spruiking from us here in the Dayglo, his career has more momentum than a runaway train. And he, like us, is here to do the boogie-woogie. Here he is, the best of fellows, a miraculous actor, and an excellent friend ... applause to the max please for the great ... Mr BENEFIT BLUNDERBUS!

This list changes depending on the weather, my tummy, the company I'm keeping, the time of day... But it has been a pleasure to do the soul searching and memory lane trips. So here goes the ten from Ben, an over-privileged white kid!

If you have never seen Blenderdax on stage, do yourself a favour, save the shekels, and make the trip to the National or wherever he's treading the boards. Always a privilege. And anytime he's on the telly -- same thing.

But here in the Dayglo, fans and fanettes, give it up please, a roar of approval ... for the great MR Betterfit CABBAGEPATCH!!