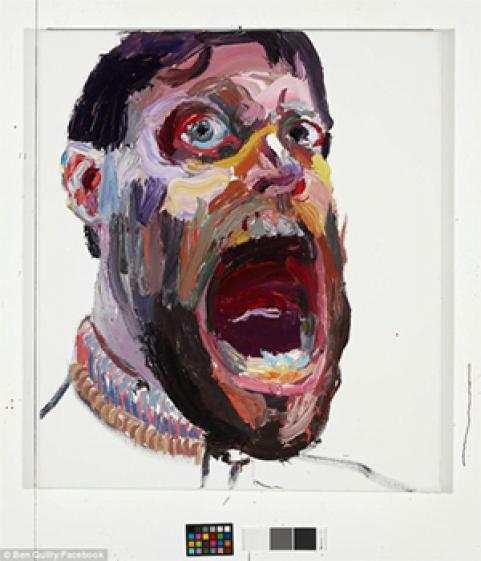 Ladies and Gentleman of The Dayglo, Tonight as Guest DJ, a man and artist we have so much respect and admiration for, we will NOT get into the usual disgraceful bagging and leg pulling and general lowdown dirty discourteous rat baggery that we usually accord our esteemed guests.

So -- Ladies and Gentlemen. Let me bring onto the stage arguably Australia's most exciting living artist -- a man known not only for his vivid and thrillingly supercharged work with paint, but also his tireless work as an activist in some of the most pressing causes of our time. He is an Archibald winner. (His portrait of Margaret Olley will bring a tear to your eye.) His work as official war artist was not only courageously honest but a moving testament to the aftereffects of war on combatants, and his Rorschach works that deal with the historical massacres of Aboriginal people are as raw and visibly distressing as any art ever from Australia. His determined and brave campaign to save the lives of reformed drug smugglers, his friend Myuran Sukumaran and Andrew Chan, was heartbreakingly unsuccessful when they faced a firing squad in 2015 after 10 years on death row. Nevertheless the campaign drew much needed attention to the extraordinarily disproportionate and grotesque way in which crimes are dealt with in some parts of the planet.

Quilty's work continues to meet both critical and...

Oh stuff it, where's the fun in this? Quilty is a ghastly bogan who owns bogan cars, drives bogan cars, paints bogan cars and is a slurred bogan drinker of bogan slurry who drives badly painted bogan cars. And what's more he's changed his name. He used to be Ben Quality, but the Dept. of Fair Descriptions put a stop to that. Then it was Ben Quilter, but the Country Women's Association quite rightly slapped a Cease and Desist on that. After that it was Ben Quoll which of course enraged all good Australian conservationists. And more. Until now it's now Ben Quilty, or Bin Kwulty as he's known in New Zealand. Quilty is....

Stop me Jesus, stop me. This was meant to be a respectful tribute, but there's something about Quilty that brings out the worst in us all. And what's more, here he is on stage...and he's a big fella too.

Hi Ben. Sorry mate, touch of the Tourette's. Not my fault. Ow!

Ben Quilty displays all the characteristics of the quintessential New Zealand male. Which is strange for an Australian.

He is warm, considerate, funny, unintentionally ironic, has a beard, and with a beautiful wife and telegenic children that look like LOTR elves (without the sour disposition and high foreheads).

With a huge heart and a tiny brain, his artistic style is something to behold, though he could probably create more pieces if he didn’t slap so much paint on each work. I mean, he does bung it on (don’t ask him to paint your house, it’ll cost a fortune).

He will stand up for the little man, and lobby publicly and with great passion for causes he believes in, and never take a backward step. which can bring him unwarranted attention and judgement. He speaks his mind, and couldn’t give a toss what others think. That’s where the Australian in him really comes out.

He is one of the world’s great humanists, so much so that he uses the word ‘human’ at least once in every sentence.

Ben is a renowned orator, speaking with a rare dignity, fervour and control. His preparation for public speaking involves playing it by ear, getting rat-faced drunk and rambling on for so long even Robert Mugabe would say, "enough already."

He is a muscle-car-loving revhead, whose great moment of enlightenment came when he bought a real work of art, a Ford XB coupe. Ben’s parenting skills come to the fore when driving, his daughter Liv often yelling, "Go Faster, Dad!"

Ben laughs like a hyena, looks like a bushranger and is a seriously funny human who makes any party better, but never wants to leave one.

Agh, dammit Paul, as always you say it better than me...

Thanks Ben! You the man! Now, should we open a bottle of something refreshing? Yeah, bugger it, let’s do that.