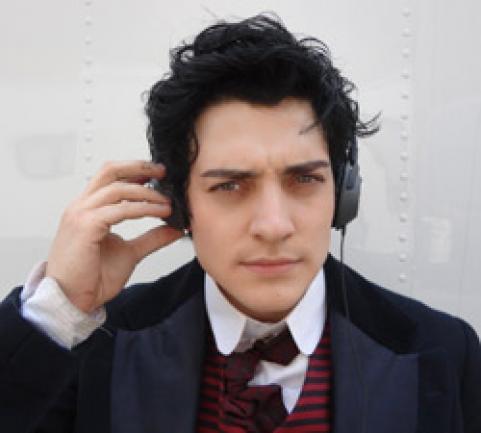 Ladies and Gentlemen! Welcome back to the Dayglo, and tonight we are pleased to announce the all-you-can-eat buffet is as fresh as you like -- the Health Dept threw out last week's -- so tuck in. In addition, Dave, our short order cook, did a runner to Marbella, so we won't be having a repeat of the prawn disaster of last month, with any luck, enough said. So! Tonight our DJ is a startling new talent -- oy, we'll have none of that screaming from you girls down the front thank you very much -- an arresting new talent from Wales, that fount of incredible actors, a man you'll be seeing a great deal more of in the years to come, a lovely fellow to boot as well as a fantastic thesp...someone the Prop loved working with on Mariah Mundi (out in a cinema near to you some time next year we assume) ...we thought he was fantastic in We'll Take Manhattan, playing the young David Bailey (bringing to mind not entirely coincidentally the young David Hemmings in Blow Up) ...he took London by storm in Spring Awakening, and drove most of the female population of Britain wild in Hunky Dory ... and so on. Here he is, flown directly First Class on Two Paddocks Virtual Airways (even if your seat doesn't work, there's complimentary champagne all the way: it's not exactly free, but we always say something nice about you when we pour!), all the way from the Valleys, a man who can actually sing, and sing beautifully -- well he's Welsh, he would, wouldn't he? - an excellent new bona fide star from Britain, a cracking bloke ... bring him up to the stage, the completely charming, the ridiculously handsome, the outrageously gifted ...MR....ANEURIN BARNARD!!!

Ok so here we have the list of 10 songs that I have picked. There were soooo many that I would have loved to have put on this list.t

But had to draw the line somewhere, so here are the ones that I have chosen.

So there you have it, I have given you my top ten songs for vast reasons. It was a memorable experience, and a lot of fun to do!

Many thanks Ni, and thanks for all the fun on Mariah too, my man. We all love your Top 10 here at HQ. Ladies and Gentlemen, give it up BIGTIME, for our friend and top DJ, the marvellous ... MR ANEURIN BARNARD!