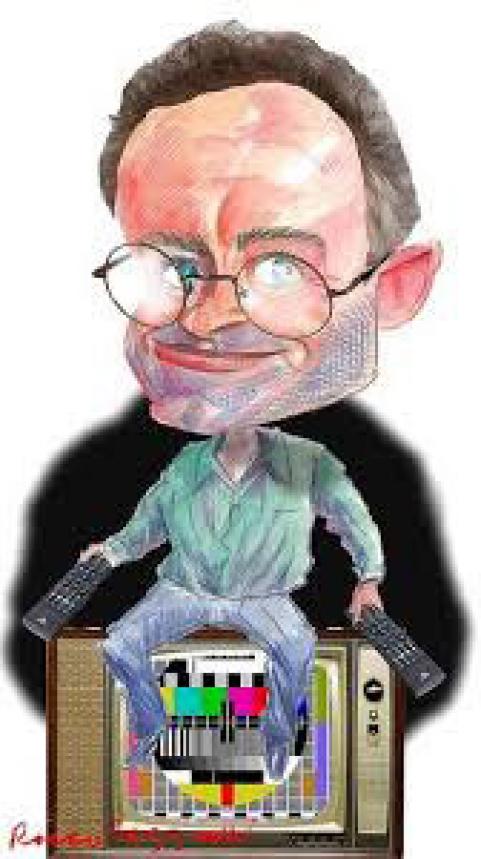 Ladies and Gentlemen! Welcome back to the Dayglo Disco ... and PLEASE ensure you have your wristbands in order tonight: the bouncers are WAY vigilant tonight. But here we are, the night is young, you're all looking delightful in the new lighting. So what's to stop an all-nighter? What indeed. And tonight, all the way from Sydney... for many years now a DJ of impeccable credentials -- starting we think at Triple J or M -- somewhere up the far end of the dial. And then graduating to the telly and becoming Australia's premier interviewer on shows like Denton and of course Enough Rope. He's talked to everyone from the famous and grand -- Bill Clinton, Bono, Matt Damon, you name it, to the obscure and humble. Like the humble Prop of this humble vineyard. Take a look -- hundreds of first class interviews on You Tube...BUT not tonight -- that's for dancin', and look, there's Andrew on the way up to the stage right now. Wonder if you remember the earlier show where Denton insisted all musical guests were required to do their version on Stairway to Heaven, and then a later show where they would have to pick a random song, blind out of a barrel. Brilliant ideas and loadsa fun. The man has done masses of other stuff, as producer, sketch comedian -- so talented you could kill him. BUT, leave that for another time -- tonight it's Dayglo time, it's DJ time, and here he is -- wit, raconteur, wine enthusiast, husband of the marvellous Jennifer Byrne, and above all music lover... A big Dayglo riot if you please for the one and only ANDREW DENTON!

How on earth did the Romans ever build an empire -- or Bo Derek a career -- on a number as limiting as ten? So many darling children have had to be slaughtered so that these Brave And Transient Few may be brought before you. Apologies to Van Morrison, Billy Bragg, Lennon & McCartney, Prince, k d lang, Prodigy, Joe Cocker, Toots and The Maytals...oh the carnage goes on and on.

Here are ten songs, each of which I could put on repeat and listen to all day.

Now Ladies and Gents, shock announcement last month you may have picked up on: Denton is retiring from television. Now it can be revealed why -- and it's a no brainer when you think about it -- why he'd retire at the top of his game. It's always 'new challenges'. And in this case -- it's to be Resident DJ at the Dayglo. And ambition common to many young fellas. Welcome Andrew, and we know it's BIG step up, but you'll be fine...