Would you drink Danny DeVito’s limoncello? The big names trying to sell us booze

From George Clooney and David Beckham to Jay-Z and Fergie, stars are adding a dash of glamour to tequila, whisky and champagne. In Drake’s words, it’s ‘one sip, and wooh!’ 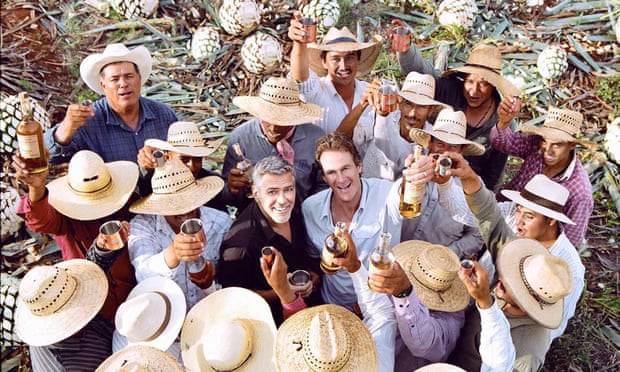 Celebrities used to be more famous for drinking booze than for producing it, but these days famous people are no more likely to take a wine than they are to take an entire winery. Case in point: actor Ryan Reynolds, who recently announced his purchase of Portland-based Aviation gin from its previous owner, Davos Brands, after first tasting the stuff a year ago.

While Davos has not disclosed what Reynolds paid or what percentage of the craft gin brand he owns, the firm says the Deadpool star will play an active role in the business. Gin is far from being the most popular spirit in the US market, but it might be a smart investment, says Joel Harrison, co-author of the award-winning book Distilled. “There has been a ‘ginaissance’ in Europe over the past five years,” he explains. The premium mixer brand Fever-Tree plans to begin distributing directly to the US, “which means Americans will soon have a genuinely good tonic to make gin and tonic. I think we’ll see a rise in gin sales as a result.”

Far from being sceptical, Harrison welcomes the star power a celebrity can bring to a spirits brand. “I champion anything that encourages people to get liquid to lips,” he says. Here are a few of the other big names doing just that. 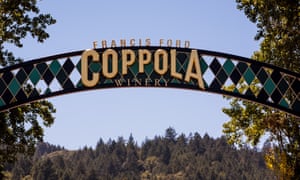 The film-maker is the godfather of Hollywood vintners. He bought a Napa Valley winery in 1975 and created his first vintage two years later. Today he has two vineyards in the region: the Inglenook Estate, which produces premium wines, and the Francis Ford Coppola winery, which makes respectable mass-market plonk with his name on the label. “Inglenook is a special place,” says British master of wine Tim Atkin. “Coppola has definitely made some great wines.” 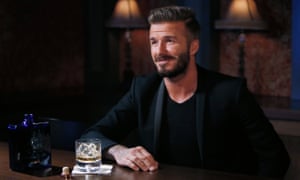 David Beckham and Simon Fuller partnered with Diageo to launch a scotch whisky, Haig Club, in 2016. Plastering Beckham all over the branding “brings a cooler, livelier element to scotch, which needs to break free from the image of tweed suits and leather armchairs”, says Harrison.

Adam Levine and Sammy Hagar launch Santo Mezquila in West Hollywood, California. Photograph: Emma McIntyre/Getty Images
The former Van Halen frontman sold his Cabo Wabo tequila brand to Campari for $91m in 2011. That year, he also launched Sammy’s Beach Bar Rum, and in 2017 he joined forces with Adam Levine of Maroon 5 to create Santo Mezquila, a blend of mezcal and tequila. Like Clooney and co, the pair came up with the concept on holiday in Baja California.

When the pair split in 2016, connoisseurs were concerned about the consequences for Miraval rosé, the award-winning wine produced on the couple’s Provençal estate. Their vintner, Charles Perrin, insisted last year that they intend to maintain the vineyard as “an investment for their family and their children”. Atkin describes the rosé as pleasant, but adds: “Provence rosé doesn’t taste of much. It’s hard to make a bad one, but it’s hard to make a very interesting one.” 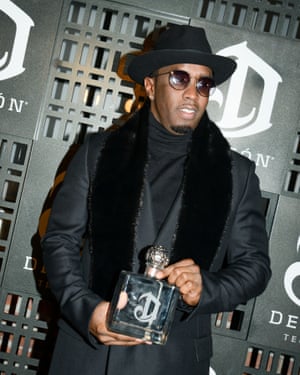 The rapper, producer and entrepreneur also known as P Diddy was first hired by Diageo to be the face of its Cîroc vodka, a deal that reportedly increased sales by 4,000%. In 2014, Combs upgraded by purchasing 50% of DeLeón tequila in partnership with Diageo.

The Blues Brothers star launched his Crystal Head vodka in 2007. There’s no mistaking it for another brand: it comes in a bottle shaped like a skull. “It’s a good product with interesting packaging and it puts a wry smile on the face,” says Harrison. “Sometimes we forget the drinks business is part of the entertainment business and it shouldn’t be taken too seriously.”

The actor debuted his Born and Bred vodka brand last year, partnering with the Grand Teton Distillery in Idaho, reportedly after setting out to find “the best vodka in the US”, a country not usually associated with vodka production. Born and Bred is made with Idaho potatoes so it’s as American as french fries. 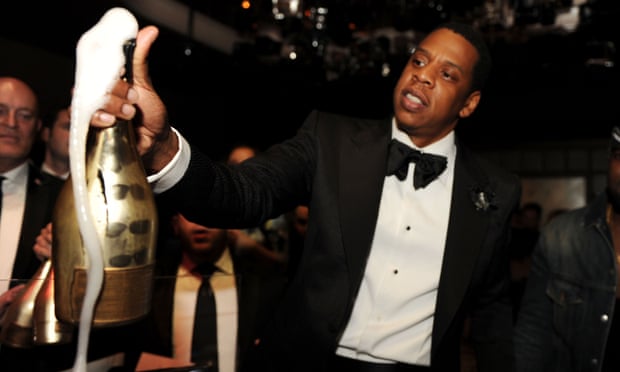 In 2006, when the then manager of the winery behind Cristal suggested its popularity among hip-hop artists constituted “unwanted attention”, Jay-Z accused him of racism and led a boycott of the brand. Eight years later, the rapper became the proud owner of his own rival premium champagne, Armand de Brignac. 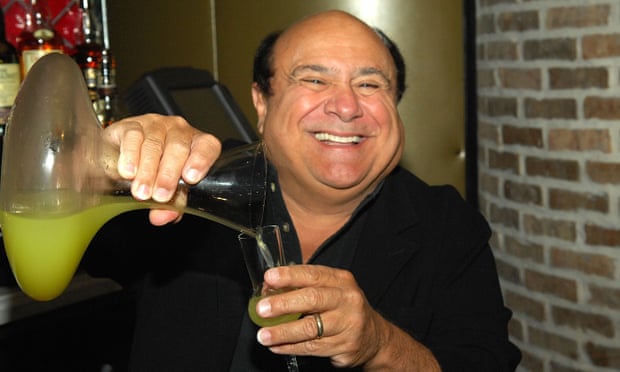 It’s probably safe to say Danny DeVito is the only Hollywood celebrity with a limoncello brand, which he launched in 2007, not long after a tipsy appearance on US daytime TV that he attributed to a few too many glasses of the sweet Italian liqueur. DeVito’s Premium Limoncello is made in Italy, from Sorrento lemons grown on the Amalfi coast.

The actor acquired his first New Zealand vineyard in 1993, the same year he starred in Jurassic Park. Today, his Two Paddocks winery produces a highly regarded pinot noir. Neill’s is the “most successful celebrity brand in terms of the quality of the wine”, says Atkin. “He enjoys it and is genuinely motivated by a love of wine. He puts in the hard graft.” 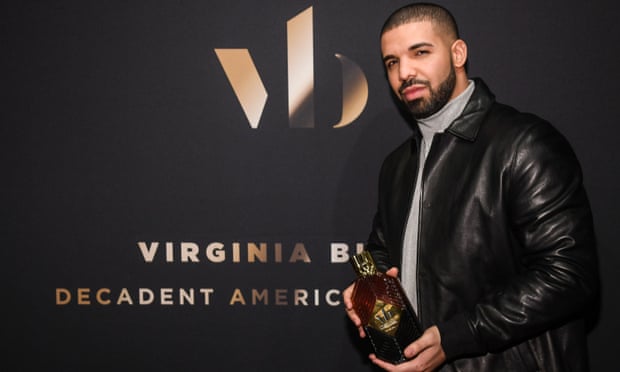 The rapper launched his aged bourbon, Virginia Black, in 2016 with the slogan “One sip, and wooh!” This year Drake intends to let fans invest, with an initial public offering that he and his partner, Brent Hocking, hope will raise $30m to expand the brand into international markets.

The trousersnake teamed up with Sauza in 2014 to launch Sauza 901, a tequila named after the telephone area code of his hometown of Memphis, Tennessee. He also dressed up as a lime for a bizarre commercial to promote the brand.

The Black Eyed Peas singer founded the Ferguson Crest winery in 2006, though it’s her father, Pat Ferguson, who oversees the grapes on their six-acre estate overlooking the Santa Ynez valley in northern California. The winery’s signature bottle is Fergalicious, a red blend of syrah, merlot, grenache and cabernet sauvignon.

The former basketball star launched Dennis Rodman Bad Ass Premium Vodka in 2013, shortly after hitting the headlines with a visit to North Korea, where he made friends with Kim Jong-un. Rodman said at the time that he’d “love to see [President Obama] with a Bad Ass Vodka shot in his hand, toasting to Kim Jong-un and me”. That dream is yet to become reality. 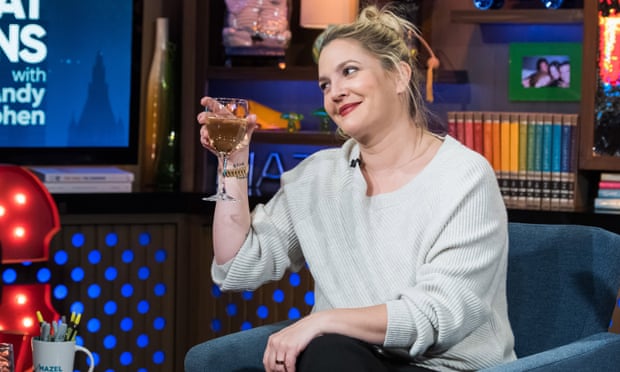 Since producing its first vintage – a rosé – in 2016, the actor’s new northern California winemaking business has also released a pinot grigio and a pinot noir. The 2004 film Sideways supposedly caused a slump in sales of merlot, from which the grape has never entirely recovered. Drew Barrymore told Fortune magazine last year: “I want to bring merlot back.