Sam Neill: 'If I’ve got a project, I don’t have time to think about how depressed I am.' 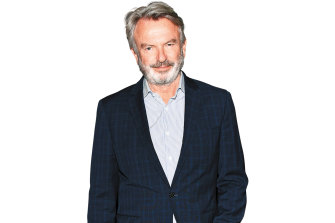 Sam Neill: "I really need projects. I’ve got to have something on the go. I have a feeling I’m an undiagnosed depressive."CREDIT:GETTY IMAGES

Each week, Benjamin Law asks public figures to discuss the subjects we're told to keep private by getting them to roll a die. The numbers they land on are the topics they're given. This week he talks to Sam Neill. The 72-year-old New Zealand actor, best known for roles in The Piano and the Jurassic Park franchise, also owns the Two Paddocks winery in Central Otago. During the pandemic, fans have flocked to his Instagram account.

You’ve rolled five. Let’s talk politics. Let me preface this by saying I’m cautious about this topic, because my girlfriend [Laura Tingle, chief political correspondent of the ABC’s 7.30 program] writes on politics.

Noted! You said last year, “I despair about political leadership everywhere right now – with the noble exception of New Zealand.” In the age of coronavirus, do you feel that even more strongly? I hesitate to have a definitive view on that [now]. I probably said that around the time Scott Morrison returned from Hawaii during the bushfires. With this unprecedented challenge we’re facing at the moment, everybody has a chance to redeem themselves.

You’ve worked around the globe, and at present you’re in Australia. Is that where you’d prefer to be, given the responses to COVID-19? I have to say Australia and New Zealand are doing pretty well under the circumstances. But what I’d like is all those people who’ve been saying, “Freedom! We need less government in our lives!” to take that back. If ever there was a time when we need good government – that isn’t ideologically driven – it is now.

We need a government that has the capacity to understand what needs to be done. More than ever, we need government for medical care [and to address] the colossal loss of jobs.

We need a strong, decisive government that will do things that are not necessarily part of their political textbook, and get us to the point where life can return to something close to what we knew before. It’ll be different but something close.

Both New Zealand and the US have elections this year. How do you expect things to turn out? One very much hopes there will be a more rational person in the White House. And I very much look forward to another three years of Jacinda Ardern’s coalition government.

I can’t imagine people get into acting for financial security. Am I wrong? [Laughs] That’s absolutely right.

Did you have any sense of what your career trajectory would be like when you started acting? No, I didn’t. I was working in documentary films for a number of years, and didn’t commit to acting until I came to Australia and realised I could make a living out of it.

How old were you? Oh, I was 29. So quite late to start a career. [Laughs] And look, the money has been good. No one’s more surprised than me at that. I’d much sooner have some money than have no money, mostly because it affords me to be busy. I really need projects. I’ve got to have something on the go. I have a feeling I’m an undiagnosed depressive.

You need projects to stave off depression? Yes. If I’ve got a project, I don’t have time to think about how depressed I am. [Laughs] In June, I’ll start planting 4000 native trees and shrubs on some land I’ve put aside on the farm. I love native plants in their own right, but I love them because they attract native birds. When I got the farm more than 20 years ago there were no native birds ever, anywhere. And now they’re gradually coming back and breeding. Money affords me to do things like that.

Is wine-making a profitable venture for you? No. [Laughs] But it’s something I find extraordinarily compelling and it’s been immensely rewarding. When I get great feedback and reviews – the respect that my wine garners – that’s immensely rewarding. But it’s more than that. It’s the whole business of working with soil and with seasons that has greatly enriched my life. Not in a monetary sense, but in so many other ways.

What film gave you your biggest pay cheque? It would be vulgar to state, wouldn’t it?

I’m going to guess it’s Jurassic Park III. Well … the next one will be a little bit better than that.

You mean the pay cheque or the film itself? Um … I’m going to leave that open!

Growing up, what were you told about sex? I grew up a long, long time ago, so I was told nothing.

No sex education at school or at home? No. And I was at boarding school, so everything was rumour. Everything was very mysterious. There was no great loss in that, as it was all about fumbling around and making mistakes. So it was really quite fun! [Laughs]

Is there anything you wish teenage Sam Neill knew about sex, in retrospect? I don’t claim to be an expert now. You go on discovering all sorts of things in life. If you’re lucky, sex is one strand of a beautifully textured and coloured fabric. A very important part of the fabric, but only part of it. And sex divorced from everything else seems kind of desolate. I know people obviously a lot younger than me are on Tinder and Grindr and things. But it just sounds kind of … arid.

A bit soulless? Well, yeah! But tell me I’m wrong. One of the tricks about being properly alive is being open to surprise, and I’m continually surprised by things.

The Australian film RAMS, starring Sam Neill, will be released later this year.