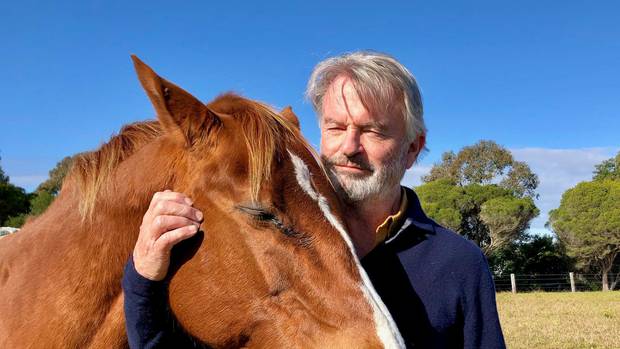 Sam Neill hanging out with his horse on his Queenstown Farm. Photo / @TwoPaddocks Twitter

Neill told Vulture he spends half his year on his farm, which is surrounded by four vineyards he owns, and loves sharing the random things his animals get up to on Twitter as there is too much anger in the social media world.  "I really don't know why people have reacted so strongly to the farm, but it's definitely a nice thing to have happen," he said.  He revealed he loved being at his farm, but it's not all about "playing with ducks" as he works there occasionally.

On his last count, the star said he had 25 sheep, about a dozen chickens, a few goats, three pigs and one duck.  And even though they are cute, he said they all serve productive functions.  "The sheep are used as lawnmowers. The pigs make manure," he said.  He also likes naming as many animals as possible after his friends' names, but said it doesn't always end well.  His chicken Meryl Streep was killed by a ferret recently, he sadly broke the news to Vulture.

However, when speaking about another death, Neill said his Ram Hugo Weaving died happy.  "He was doing what rams do — he fell off the back of a female sheep, he said.  "Rams can service, shall we say, up to 80 females in a day. There's no other male animal on the planet that has that capability. He went the distance and died on the job."

On the brighter side, the actor revealed that an unlikely friendship blossomed on his farm when a friend's older horse made friends with a wild sheep. "We put the sheep next to the horse and they became absolutely inseparable. They're two old men. They're never more than 10 yards apart," Neill said.  The horse apparently doesn't like other horses, but he took to the sheep immediately.  He said they nuzzle each other all day and when it rains the sheep takes cover under the horse.

Another unlikely friendship is between Neill and his duck Charlie Pickering, who thinks the actor is his dad.  There's something about that duck! He loves being in my company and I love hanging around with him, too. I have a small lake on the farm, and in the summer I like to swim laps, and he likes to swim laps with me," he said.

Neill also likes hanging out with The Pig, revealing that one time the animal joined in to do some yoga.  "He comes to life beside me, but he respects my space if I just want to kick back, relax, and read a book next to him," he said.  However, not all pigs are happy on his farm as two male pigs, Angelica and Taika Waititi, have been fighting over a female pig, Imogen Poots, he explained.  Taiki apparently has another girlfriend down the road, but is meant to be with Imogen. So Angelica had his way with Imogen "illegally", causing the male pigs to scrap it out.  When the Vulture asked the actor about Helena Bonham Carter the cow, Neill revealed she has and shamelessly flirts, by nuzzling and sniffing his backside, with Jimmy Nesbitt the bull.  "She's been at it for days now. I avert my eyes," he said.

Neill said he fills in his celebrity friends, including Helena Bonham Carter and Imogen Poots, who are invested in their animal counterparts.  Poots is working nearby and excited to meet Imogen the pig soon.