A vintage actor: Why Sam Neill no longer craves approval 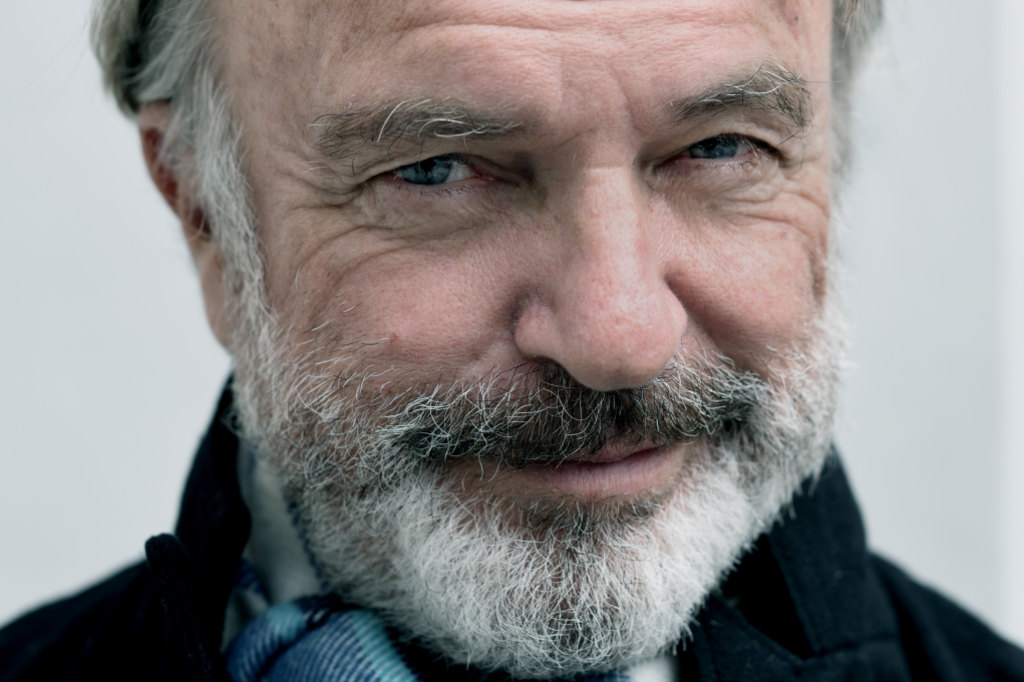 On any ordinary day, 11.30 in the morning might seem a tad early to be drinking wine. But it was election day and as things would turn out, it probably wasn’t early enough for some. On that crisp, sunny, winter morning in Tasmania at the Pinot Shop in Launceston, a group of wine lovers were contentedly sampling Sam Neill’s wine.

The actor was in town for the Breath of Fresh Air film festival, amiably providing the star power. But the pre-lunch wine tasting was an excursion into his other life; the rolling in the mouth of something beguiling and intriguing that spoke of deep icy lakes, steep gorges and snowy mountain ranges. Far away from the red carpets, Neill lives in a parallel universe. One that is profound, rich, sustaining, often hilarious – and literally down-to-earth.

"When I wrap a film I plunge back into life on the farm with my people there, with the animals, vines, the landscape. And the annual rhythm of winter, growth, harvest, fermentation. I think one is kind of a relief from the other; they are completely different worlds," Neill says.

Although Neill is a man inclined towards the humorous, making the pinot noir and riesling from his four vineyards in New Zealand’s Central Otago is a deeply serious business. Even if the Twitter posts to his 310k followers about the eccentricities of his farm animals – mostly named after his famous friends – might suggest otherwise. "Everything is free range here, almost to the point of feral."

Now, 71, Neill has previously said: "Wine-making is the only thing I’ve really formed any ambition for. My acting career has always been muddling from one thing to another, and a lot of good luck."

In the evening, after the wine tasting, the actor and director Gillian Armstrong presented a remastered version of My Brilliant Career to celebrate its 40th anniversary.

To add to this slightly surreal day, Neill’s partner, ABC chief political correspondent Laura Tingle, hovered over the event, reporting on the election on the ubiquitous televisions. My Brilliant Career, in which Neill stars, was undoubtedly good luck. Before being spotted by producer Margaret Fink in Sleeping Dogs (his only other film role), Neill had been an unknown, long-haired hippy Kiwi documentary maker. His "accidental" international acting career would soon speed him to London to play the Antichrist in The Omen III. 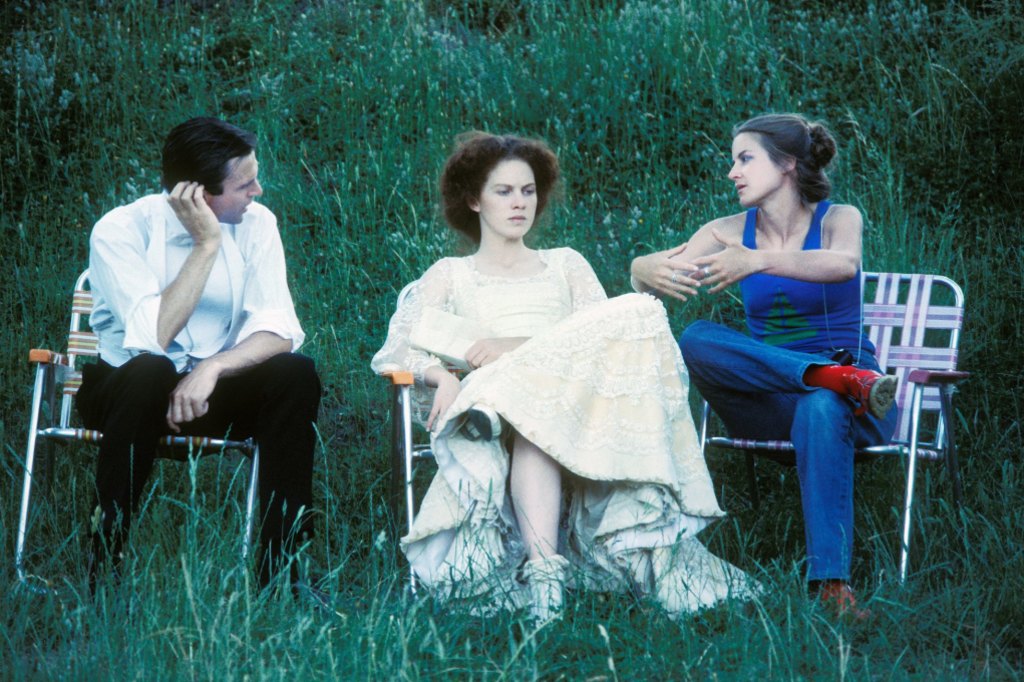 On the set of My Brilliant Career 40 years ago are Sam Neill, Judy Davis and director Gillian Armstrong.Credit:David Kynoch/NFSA

And it was there he encountered a miraculous glass of wine, when the legendary actor James Mason took him to Charlie Chaplin’s favourite restaurant in the Lavaux region of Switzerland, in 1979.

"It was very good food and Charlie Chaplin’s name was carved in the timber beside the table. James bought a bottle of Gevrey Chambertin. That glass really changed my life. It was an extraordinary discovery to me to have your first glass of something that glorious. And you were a) not drunk and b) your senses were alert. It was an absolute clarion call. He told me ‘this is Burgundy’ and explained where it was from and what the grape was. I was really quite astounded and then doubly astounded when I discovered that you could actually grow pinot noir down the road from where I live in Central Otago."

In 1993, a friend offered Neill a block in a subdivision near Queenstown in the South Island – "and that is where all this hideousness started."

Still, it took guts – and a lot of movie money (fortunately, this was the year the actor starred in Jurassic Park) – to plant pinot grapes at his first two hectare Two Paddocks vineyard in the ruggedly scenic Gibbston Valley. Nowadays, Central Otago pinots are recognised as world class, but back then it was still to be proven. He knew that planting in a valley where the temperature can lurch from 23 degrees to minus three could be a "heartbreaker".

But in 1982, Neill’s friend Rolfe Mills had planted pinot. "We went over to his place for lunch one day and had a bottle of his pinot. It wasn’t great, but it was really surprising. This was telling us something. The pinot was sitting up and going ‘I want to grow here’. If it had been sav blanc I couldn’t be arsed. But pinot was a different story."

In 1997 he tasted his own wine for the first time. "I thought ‘I hope it is drinkable’. And it was much better than drinkable, it was very bloody good."

The genie was out of the bottle, so to speak. "That was the fatal error really," if this was the movies he would narrow his eyes here to a glint "then I realised I didn’t just want to grow and produce really good pinot, I actually wanted to make the greatest pinot in the world."

"Central Otago is beautiful but very, very challenging," he says. "The climate is both our great ally and our most profound enemy, but it is most important that you grow in a cold climate." He has now bought an additional three blocks in the other nearby valleys and can make five different pinots in any given year. 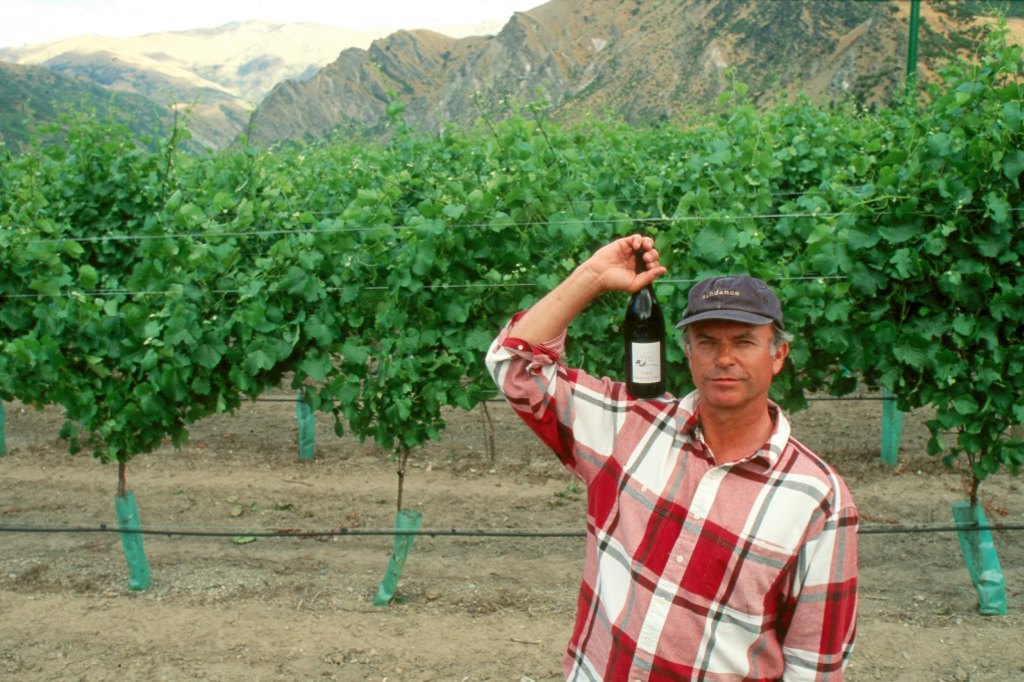 "We have to carefully look at what we have got in the barrel and then make sure we have got the best blend we can evince from all four vineyards. And to keep to our house style, which is restrained. In a good year we will produce a small amount of single vineyard from any vineyard that is speaking clearly to us."

In the beginning, his wine was greeted with scepticism, with Neill dismissed as a dilettante, a hobbyist. "We have had to overcome certain prejudices. So while I don’t think scores from wine magazines are really important, I am really grateful when I get one and can go ‘well stuff you, this is 95 points from Wine Spectator’."

In awarding this score (consistently), New York Wine Spectator’s MaryAnn Worobiec described Proprietor’s Reserve 2016 The First Paddock Pinot Noir as one that "leaps out of the glass, with sophisticated aromas of white pepper, toasted cumin, dried lavender and white truffle. The pure maraschino cherry, pomegranate and cranberry flavours are fresh and vibrant, and the whole package is balanced and complex, reverberating on the finish, with just enough tannic traction to impart an appealing muscular core." 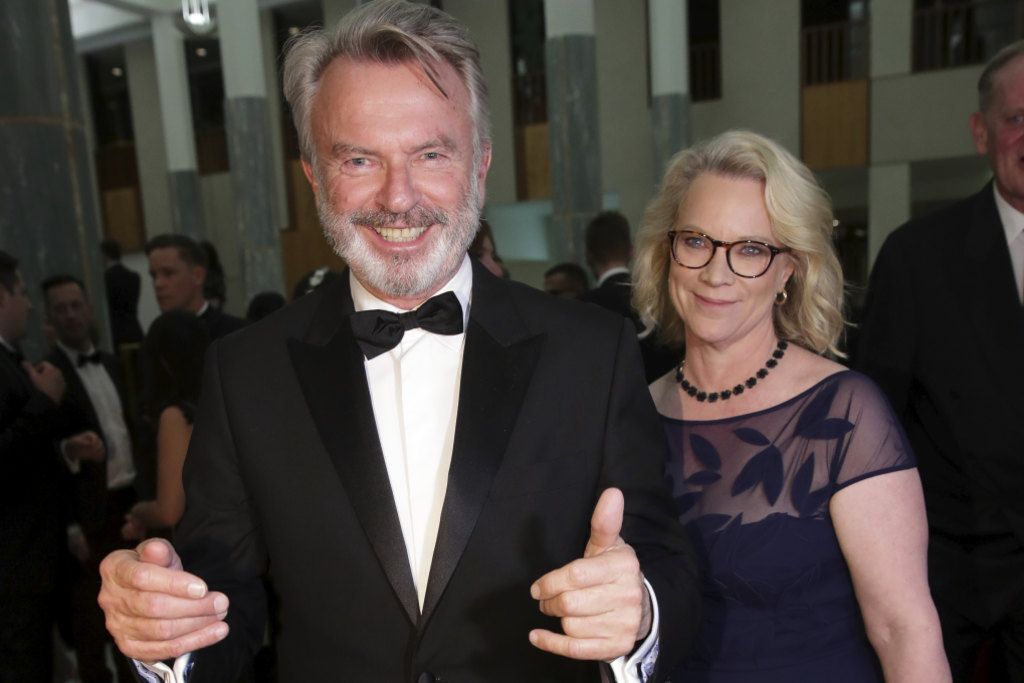 Neill and Laura Tingle arrive for the Mid Winter Ball at Parliament House in 2018.Credit:Alex Ellinghausen

There are extravagant stars and scores galore when it comes to Neill’s wine. But still, he says he was more surprised than anyone when a bottle popped up in season two of the hit TV show, Killing Eve.

"There was Fiona Shaw [who plays MI6 agent Carolyn Martens] pouring my wine. I got all these Tweets saying ‘well I bet he spent $50,000 to get that’. Who are these people? It is not even sort of vaguely insulting to me. It is insulting the producers and writers of the show that they have been somehow bribed into mentioning my wine. But apart from that I loved to see Fiona Shaw pouring my wine. And it is a good show, it doesn’t get any better."

"I feel like I’m part of the soil," the actor says. Growing up in Dunedin, the family would go camping in remote parts of Central Otago, fishing and swimming in pristine lakes and rivers. "Dad would say, ‘I don’t know why nobody is growing wine here, this is exactly the conditions it needs.’"

The acclaimed pinot wine was a natural progression, a generational continuum. When asked if he gives his winemaker Dean Shaw directions, Neill says – "yes I do, but I don’t think he listens to any of it". But perhaps he is being a trifle disingenuous. He is a consummate winemaker. What started as a "delightful diversion" has become a "crazy obsession". He admits, "I love sitting down with those in charge who sort of nominally call me the boss to think about what do we want to do next year, what worked last year. I love that process."

But he is not always completely hands on. "If it is cold and wet I have got lots of things to do in the office, if there is any pruning involved I have got RSI and my hands aren’t up to it. Because a lot of it is very boring. We estimate that every one of our vines is visited by a pair of hands about 13 or 14 times a year – but not usually my hands." Because it is so labour intensive, Two Paddocks is in limited supply, a rareness that gives it cachet and makes it reasonably expensive.